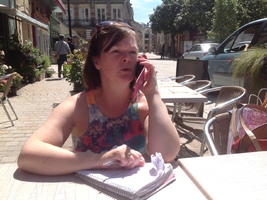 YOU CAN SEE OUR CLIENTS IN:

ELEANOR CHAGANIS will be seen playing Mrs Trott, Mrs Giant, Mysterious Lady in JACK AND THE BEANSTALK in Dubai till 26th March and again from 2nd May to 2nd July 2022

BALVINDER SOPAL has joined the regular cast of EASTENDERS playing the role of Suki Panesar.

ALICE BLUNDELL is the new face of LNER, she has filmed for a new ITV drama; an episode of SISTER BONIFACE MYSTERIES for the BBC

TAYO ALUKO is filming a new series for ITV and Amazon; he can be seen in the FaceBook Portal commerical;  filmed an episode of MOVING ON for LA Productions/BBC and is touring the UK in his one man shows

NICK BIRKINSHAW has recently filmed a series for Netflix

GILLIAN JEPHCOTT has filmed an episode of BRASSIC

RICHARD COSTELLO  filmed DEATH OF ENGLAND for the National Theatre

JOEL STOCKHILL can be see in the BOOMIN' SOUTH POLE commercial

COREY TREVOR can be seen in the Dominos Yodel commercials

JEANNETTE PERCIVAL recorded POWER OUT, WHEATISH and two episodes of Series 6 of THE CITADEL both for BBC Radio 4 Drama

JAKE NORTON recorded GIVE DOTTY A CHANCE for BBC Radio

Are You Looking for a New Face or New Talent?

Then you have come to the right place. EOC Management is a full-service agency representing actors and actresses in the UK.

We see ourselves as treasure hunters for new and fresh faces that meet our clients' requirements exactly. This philosophy has made us very successful for many years now.  We currently represent clients from all over the UK.   Actors and Musical Theatre Actors we are the agency that can meet your needs.﻿ Click here to browse through our files with the subcategories ACTORS, ACTRESSES, and MUSICAL THEATRE.  We are sure that we have the face you have been searching for.﻿